The history of Cascina del Monastero began in 1926 when Alessio Grasso, son of farmers and winemakers in the area of Barbaresco, became the owner of Cascina Luciani and the vineyards surrounding it.

It was a farm that had once belonged to the Benedictine monastery of Mercenasco and for 300 years it had been run by the monks of San Pietro di Savigliano.

This place is steeped in history, in fact in 1775 it hosted the then-don Luigi Barnaba Chiaramonti, destined to become Pope Pius VII and crown Napoleone Bonaparte.

While traveling through Asti on his trip to Paris in 1804, Pope Pius VII met Mattia Settime and Giacomo Roggeri, Maire and Aggiunto from Morra. Remembering those places he exclaimed: „Ah! Morra! Beautiful sky and good wine. “

The destiny of Cascina del Monastero was written in history that day, and since Alessio Grasso it has been expanded and improved without modifying its spirit, but rather adapting the structure to the needs of a vineyard in the forefront of the production of fine wines.

Located in the heart of the Langhe, in the area of Annunziata, Cascina del Monastero continues to honor the name of Luciani, etymologically derived from the Latin ‘lux, lucis’ (light), since it is completely bathed in sunshine.

The hill behind the company holds over 5.7 hectares of vineyards, at an average altitude of 300 meters above sea level, on clayish-calcareous soil.

The forefather Alessio Grasso has found a worthy heir in his grandson Giuseppe, who now runs the company with his wife Velda. They both hope that one day their children Loris and Giada, the latest descendants of a family devoted to the Langhe, will take the helm of the firm. 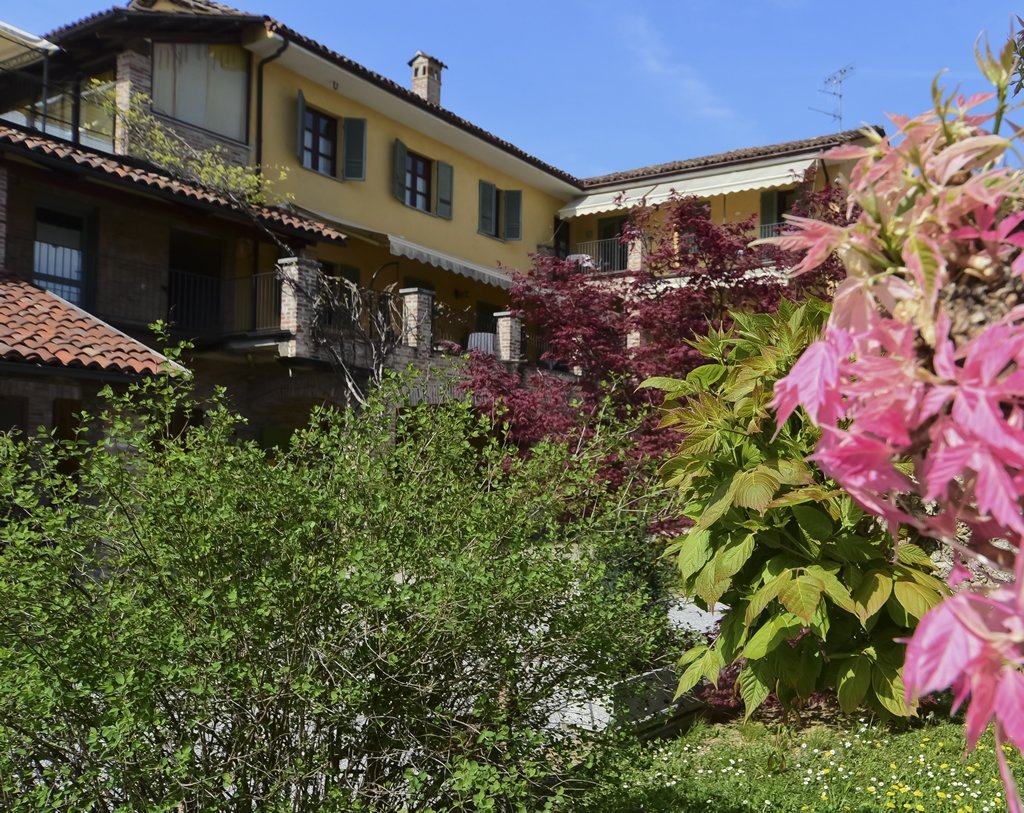 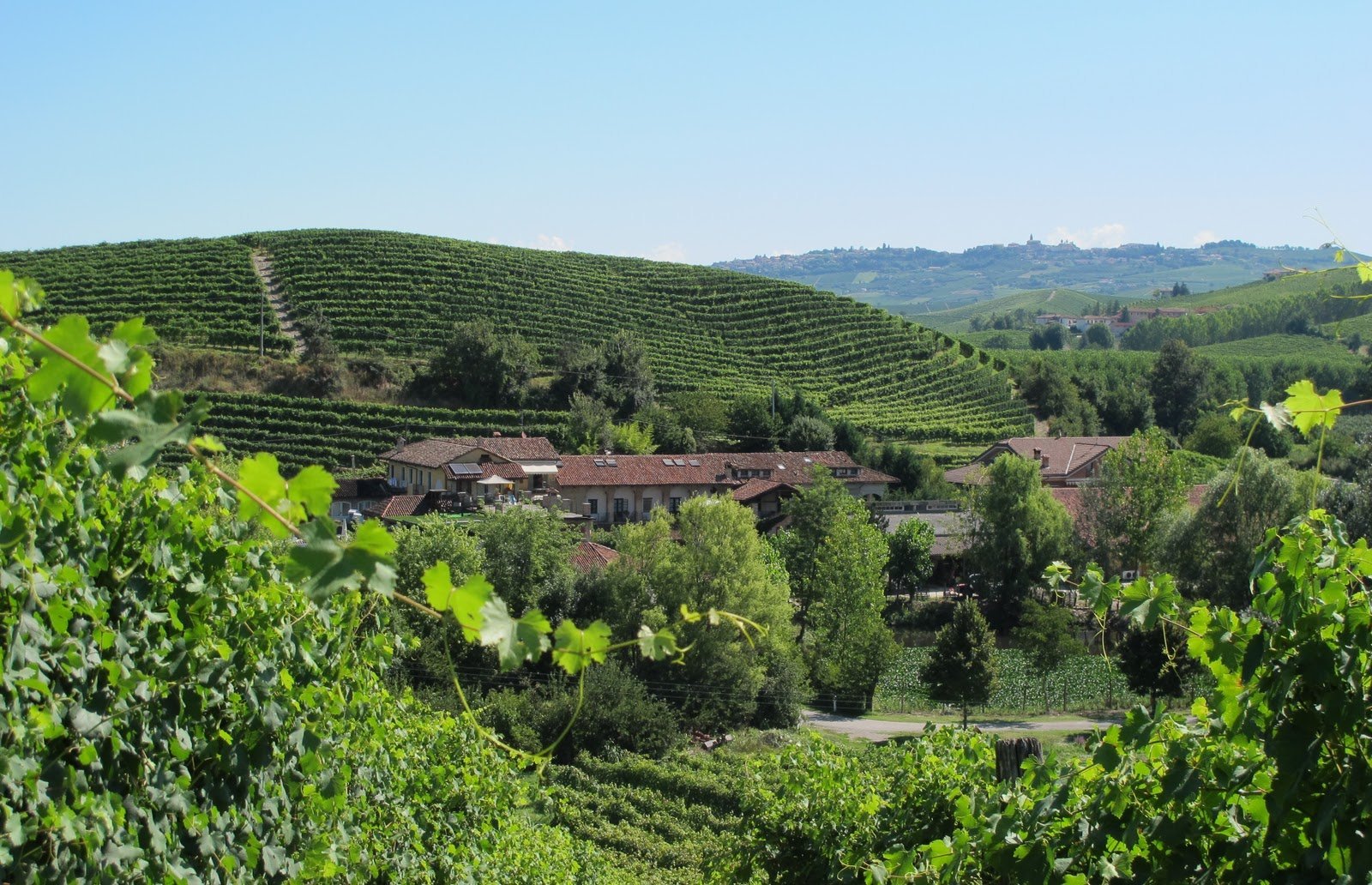 Over the years, Giuseppe has worked hard in order to expand the old farm and provide it with a new wine cellar, which now uses advanced machinery intended for winemaking processes.

Today Giuseppe considers himself a wine artisan. His organic wine is produced with great skill and refined by modern technologies.

While visiting the cellar however, it becomes clear how this search for new technologies has not led Giuseppe to forget the efforts made by his forefathers.

In a corner, there is a small museum dedicated to the traditional tools employed in the past to work the land. It reminds visitors how hard it was in the past to turn the vineyards into that precious good which is now considered one of the most famous products of the Langhe.

For 22 years Cascina del Monastero has also been an agritourism, where, thanks to Velda’s skillful touch, it is possible to experience the ancient art of hospitality exercised by the Benedictine monks who once ran this farm.

Velda is the inspired guide who takes visitors on a journey of flavors, tastes and aromas, essential parts of Langhe traditions. Ten old-fashioned decorated rooms, each one different from the others, round out the scenery, which turns out to be the ideal realm for anyone wishing to find serenity, and regain possession of those rhythms which everyday life has deprived us of.

Coming back to wines produced, there are ten labels offered by Giuseppe Grasso:

Barolo „Bricco Luciani“ produced with grapes coming from the „Cru“ Bricco Luciani in the Annunziata area. With a fermentation that lasts 14-18 days, the aging of this Barolo takes place in barriques, where the wine ages for a year. After this period, the wine is then transferred into oak barrels where it ages for two years. Its last step is the bottle, which lasts at least one year.

The pride of Giuseppe, this wine reaches its peak when it is consumed after a few years in the bottle, where it further refines its already rich organoleptic qualities. Recommended with mature herd cheeses and seasoned with braised meats, roasts and game.

The dry, tannic and well-structured taste balances a slight hint of acidity and goes particularly well with red meat, even wild, and mature cheeses.

Barbera d’Alba Superiore „Parroco” is named after the vineyard where the grapes come from, with vines over 50 years old. The aging of this wine starts with 24 months in French oak barrels. After this period, the wine needs another year of aging in the bottle. The color is an intense ruby red, with slight garnet hues. Its aroma is rich with hints of underbrush. The taste is harmonious, with a pleasant and lingering aftertaste.

“Leprié” represents a classic Barbera d’Alba. It is produced from an old vineyard located in the area of Perno, a small hamlet of Monforte d’Alba. Its superior quality is due to the small quantity of the carefully selected grapes. This wine requires a medium to long aging period. For this reason, it is best appreciated after 2 years of aging. The olfactory evaluation reveals a nicely balanced wine. Round, with a good thickness and a good acidity, this wine is particularly drinkable. A slight rustic touch does not interfere with its elegance, making the wine easy to pair with both rich and simple dishes.

Langhe rosso Sarset is obtained by assembling Nebbiolo and Merlot in different proportions, and is left aging in oak barrels. In the glass, it reveals its docile, linear and fruity character, and a hint of spices slightly combined with its great elegance. In the mouth, this „Sarset“ enters on tiptoe, gently, only to leave a good tannin taste at the end.

Dolcetto d’Alba Superiore, whose grapes come from the vineyards of Roddino d’Alba and more precisely from a vine called „Siri“. This wine is aged in old oak barrels for about 12 months, followed by 4 months in stainless steel vats and another period in bottle.

Barolo Bricco Rocca Riserva Riund shows a bright garnet red color accompanied by orange hues typical of aging wines. The aging process is obtained by dividing the wine for two years between barriques and French tonneaux. The wine is then left aging two years in oak barrels and it is finally stored for another two years in bottle.

This Barolo results quite complex, suitable for consumption even many years after the harvest. It stands out for its typical intense red-garnet color with orange nuances. The nose shows aromas of rose, violet, small fruits, with an intense spiced scent. The taste is harmonious, round with a slight tannic note. Its alcohol content increases the wine lifetime.

Finally, Barolo Perno, made in the area of „Perno“ in Monforte d’Alba. This is the company’s Classic Barolo, aged in the cellar for at least three years in order to become what is now considered the king of wines. The vinification process of its grapes results in a wine of great purity and freshness with exuberant aromas of an impressive structure, accompanied by an exceptional roundness and velvety tannins. The wine thus results very open, flagrantly pleasant and balanced even though young. The nose is dense, enveloping, with hints of rose, raspberry, underbrush, together with delicate nuances that recall vanilla and licorice. The intense garnet red color possesses deep bright hues, showing notes of amaretto and tobacco.

In the mouth, this wine is full and spiced with dense, sharp but not aggressive tannins, which build up its consistency. It goes well with game and meat dishes and for those who want to enhance its fragrance, it is ideal with typical Piedmontese appetizers.